So, the attribute system for Spark is linked to Dice. The larger the die, the better the attribute, in a system somewhat similar to that found in Savage Worlds.   A D4 attribute is crippled, while a D12 is human maximum.

This is a clear example of a D12 Body attribute, representing the peak of human physical capabilities.  I am impressed and I hope you enjoy it as much as I did.

One of the design goals for Spark was for the character creation process to take the least amount of time possible while still retaining the diversity of character options.   I am pleased to say that I appear to have been successful, at the very least during my playtesting.   I had two of my playtesters over this evening specifically to examine the process for making a new character.  Each of them had some experience with the system and had previously made characters, yet they were able to achieve some impressive results.  Typically they would have more guidance in the form of setting specific documents but this was partially an exercise in improvisation.

Cantina Scene: I set the scene as the Cantina from Star Wars and asked the pair of them to make unique alien characters, with no other restrictions.   It took 30 minutes from conception to completion of the characters and both of them fit the bill.

Player A made Olivia the Octopod, a hard-drinking, fast flying, 8-tentacled pilot of a mid-size transport ship.

Player B  made Grog, a hideous ogre-like alien who has apparently liberated the plasma cannon from a fighter jet for use as his personal rifle.

Tavern Scene: After that success, I directed them to attempt a similar exercise within a standard fantasy setting and it took another 30 minutes to finish these characters off.

Player A made P’eri the Magnificent, halfling wizard with delusions of grandeur. She was a wizard with a talking and somewhat intelligent elephant familiar.

Player B made Hali-h’imam, an eternal water elemental who is spending his time one the dry lands to watch the solids and learn their ways. While he has a harder time affecting the physical world, his quasi-material state also protects him from many forms of harm.

Some useful feedback was given, but I am fairly pleased at how well the system is functioning.  Thirty minutes to make an unusual character is perfectly appropriate in my opinion.  I would be eager for new challenges though, if any of you fine readers would like to propose a type of character for me, I will try to see if the current system can accommodate it.  If it doesn’t, I will be happy to feature your character in the book.

I would like to throw a question out to the crowd (which I expect shall materialize any moment now). What kind of content would be interesting and useful to all of you. There are two different kinds of content that I could offer.

Presently, I am thinking of providing game-focused content such as the state of the current development, new artwork and the Alternative Games series of posts.

Alternatively, I could instead focus on the broader theme of game development and explain my process of design from initial glimmer to final product.

What say yee, oh noble and silent readers? What would be interesting?

The lovely and talented Jess Hartley has launched a project, experimenting with a new form of alternative publishing. Chiefly, this is a patronage system where only those who sponsor the project up front will get the early access/printing of a new piece of fiction. For an additional donation, particularly generous patrons can be written into the story as characters.

I am glad to try to support this experiment and I hope it works out well. For more information, check out her site. 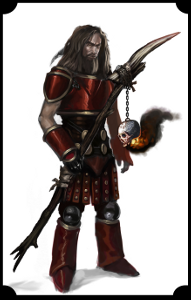 An illustration of a tool used by a character

I am pleased to provide you all with a quick look at some of the art produced for the Spark RPG.   These are still the early days yet with regards to art direction, but I was eager to get this artist working on this project.

This piece is actually part of an expansive illustration of Tools.  The game system accounts for “Tools”, external aids which are used by characters to accomplish tasks.  Tools are not limited to physical items, but rather include any external aid which can help in physical, social or intellectual pursuit.  A magus might have a spell formula which helps her conjure demons from the ether.  A gentleman might have some juicy blackmail which assists him in confrontations with the mayor.

This particular illustration is showing off the staff as a tool for his magic use.  His red armor is another good example of a tool which will protect him from blades or arrows alike.

The artist in question is David Sondred, who can be found at Studio Colruophobia.  I have worked with him in the past and his dynamic figure illustration is impressive.