I am pleased to report that my design work has been progressing apace. I thought you fine folks might want an update.

1) I am officially out of the running for Game Chef 2010, but I have learned a great deal from the thoughtful reviews and the feedback I have acquired. My plan is to revise the game rather heavily and transition A Sojourn in Alexandria into a more versatile GM-less game with more structured resolution mechanics. This is going on the backburner. but eventually a more refined product will be released into the wild.

2) I am now undertaking some more serious alpha playtesting of the Spark RPG with my local crew. I will run a 5-session long game in a post apocalyptic Ottawa. At present we have a techno-wizard, a telekinetic thief and a military-ops samurai. I am experimenting with some novel mechanics for encouraging previews of future sessions with Fate (XP) and I have great hopes that this will add something solid to the gameplay.

Now, there are some fairly significant elements of the existing system that I am not currently terribly comfortable with. I am trying to determine how I might modify the system to streamline and prevent some of the need for delicate counterbalancing. My current design has “Glories” which are for all intents and purposes, mechanically complex merits and flaws. I think that I might be able to streamline and cut out some of the fiddly bits. I will keep you posted!

Do any of you gentle-beings in the aether have any questions for me? Now’s the time to ask!

I have had a bit of progress with Spark of late and I thought I would explain where I am at in a bit more detail.   My master plan is to produce a single printed book which will be 8 chapters in length.  The first four chapters would contain everything you need to play or run a game, from character creation to funky powers to the intricacies of narrative arcs.   These four chapters would be freely available in PDF form on my site as soon as they are completed.

The last four chapters would contain some of the useful tools for running a game.  This would only be found in the dead-tree versions, or in the PDF version which I will have up for sale.  This is the full toolbox to help a GM tinker under the hood, build their own settings and would present three new settings to play in.

Since I have stated this publicly, I suspect that some of the above information will be forced to change.  Still, at this point, that is how the book is organized.

I have written first drafts of the first four chapters already.  I have done substantial revisions to Chapters 1 and 2 thus far, based on my early playtest feedback.  Chapter 3 revision is proceeding apace and I have a decent plan of attack for Chapter 4 when I reach that point.  I hope to have this (chapters 1-4) out to external playtesters in a few months and with luck I will be able to complete all of my editing by end of 2010.   I have a lovely line editor who will be helping me polish and clean up the countless residual errors when I am ready.  If all things go as planned, I should have chapters 1-4 complete in time for GenCon and on sale in a printed AshCan format.

So that is the current status of the Spark RPG.  I haven’t leaked that much content thus far, chiefly because at this early stage in development things are likely to change.  I just hacked off a significant sub-system the other day for example.    Still, I will try to give a few more trinkets as the editing progresses.

Anyone have any thoughts, comments, questions or concerns on my so-called master plan?

One of the announcements from GenCon 2010 is the new initiative by the name of Bits and Mortar. It’s an alliance of publishers who vow to provide PDF’s to any customers who buy their printed books. This maximizes the value of the books we produce and helps support friendly local game stores support themselves in the online world. I have submitted our application to join this alliance and you will be able to benefit from a full PDF guarantee. I hope you are as excited as I am about this initiative and support the cause. 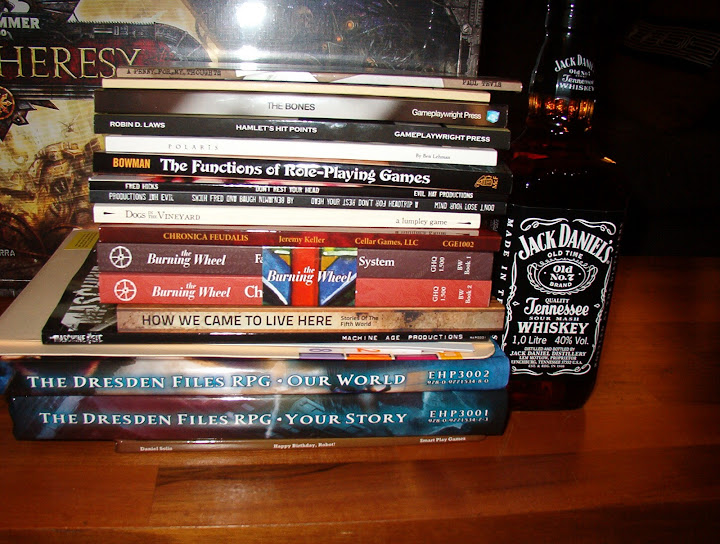