Genesis of Legend Publishing Inc. (Ottawa, Canada) and Sword Queen Games (Manilla, Philippines) will be co-publishing their new science fiction-roleplaying game. ONCE MORE INTO THE VOID is inspired by the TV show Star Trek: Picard, and the video game Mass Effect 2. One of the players is a Captain who must make amends, face the consequences of the past, and try to bring back together their old crew. Reminisce about the past, fall in love, get in messy entanglements, see if you can survive the final mission!
ONCE MORE INTO THE VOID is coming to Kickstarter on May 11th, 2021. Head over to www.kickstarter.games to learn more about this exciting new game.

Genesis of Legend Publishing Inc. isa small independent publishing house founded in the summer of 2009. They are primarily focused on producing tabletop roleplaying games that explore big questions of society and identity. They have successfully kickstarted seven projects since 2013 including such titles After the War, Palanquin, and Sig: City of Blades. They also occasionally develop fiction, live-action roleplaying games, board games, and card games.
Sword Queen Games. isan independent game design studio established by Jamila R. Nedjadi (they/them) in February 2019. They have produced dozens of quality roleplaying games thanks to the support of their backers on the Patreon funding platform. Sword Queen Games also has a publishing partnership with Evil Hat Productions for their game titled APOCALYPSE KEYS.

Once More Into the Void

We were comrades, we were family.
We were once the heroes of this galaxy. We stood against the tide of darkness and prevailed, again and again. We were comrades, we were family.
But our family fell apart. Our shared past is full of shame,  trespasses, and secrets. We parted ways, vowing to never see each other again.
And now, our greatest enemy has returned. Manipulating from the shadows, they grow stronger than ever. No one else believes the threat is real. Only the CAPTAIN has a chance at defeating this enemy, once and for all. But the Captain can’t do it alone.
The Captain will have to bring the crew back together again. But will they go with them into the void once more? Can the crew trust the Captain again, who left disappointment and heartbreak in their wake?
———————————————————–
Once More Into The Void is based on the brilliant structure of MOBILE FRAME ZERO: FIREBRANDS by Meguey and Vincent Baker. This means you don’t need to prepare a plot in advance or have a Game Moderator (GM). Instead, Once More Into The Void is made up of mini-games, each one guiding a single dramatic scene or a small group of them. The mini-games are easy to pick up and play, players make interesting choices for their characters and follow evocative prompts and laser-sharp questions. Everyone collaborates to tell an emotional and heroic story together. Everything culminates in one final mission, that may end in tragedy or triumph!

For interview requests with game designer, Jamilla Nedjadi, please contact us at swordqueengames@gmail.com

The United States of America is currently suffering from an unprecedented series of police riots, where countless children, elderly citizens, journalists, legislators, and medical professionals have been gravely harmed. We condemn all such acts of violence perpetrated by individuals and organizations who have betrayed their oath to serve and protect.

Genesis of Legend strongly supports those individuals taking a stand for justice and police accountability. We will be donating to the Black Visions Collective and The Bail Project respectively and encourage you to do the same. Here’s a little bit about these organizations.

The Black Visions Collective envisions a world in which ALL Black Lives Matter. We use the guidance and brilliance of our ancestors as well as the teachings of our own experiences to pursue our commitment to dismantling systems of oppression and violence. We are determined in our pursuit of dignity and equity for all.

The Bail Project, Inc. is an unprecedented effort to combat mass incarceration at the front end of the system. We pay bail for people in need, reuniting families and restoring the presumption of innocence. Because bail is returned at the end of a case, donations to The Bail Project™ National Revolving Bail Fund can be recycled and reused to pay bail two to three times per year, maximizing the impact of every dollar. 100% of online donations are used to bring people home.

Our Games, Their Stories

If you are helping in the fight for justice and black lives, we want to give what we can. We are offering a bundle with free PDFs of all of our games to anyone who fits at least one of the criteria below.

If this is your case, please email us at genesisoflegend@gmail.com with “Black Lives Matter” in the subject line and we will send you our catalog. Thank you .

Roleplaying games are marvellous tools for fostering empathy. As a medium, our games demand that participants take on alternative perspectives and personalities. By playing in a game in the role of a refugee of a galactic war, you might reflect upon how you would react to the loss of your home or adaptation to a foreign culture. If you portray a character who leads a fantasy kingdom, you might instead be forced into the hard choices of leadership. Each of these experiences has something to teach us.

At their core, roleplaying games are driven by the decisions that the players make at the table. The strongest games are those who design that decision-space with intention and purpose. Apocalypse World is all about how you build and maintain relationships in a world in ruin. Monsterhearts concentrates instead on how teenagers learn to cope with challenges of identity and expectations. Each of these games leads the players to explore different avenues of thought.

In my personal design praxis, I combine the concept of intentional experience design with that of the fruitful void. Each of my games revolves around an attempt to foster specific, challenging problems that the players will have to try to examine during play. In Sig, it’s about the conflicting needs of family, faith, and politics. After the War is about how we can learn to support communities which have suffered trauma. Circles of Power asks you to think critically about complex issues of intersectionality and activism. Each of these games carves out conceptual space for players to explore within a safe context It helps us gain valuable skills and a deeper awareness of important issues.

I tend to refer to this approach as contemplative design, and I would love to hear your thoughts on the matter. Do you take a different approach? What kinds of challenging material do your games help us explore? Let’s start a conversation.

Whenever I run workshops to teach new tabletop game designers, I produce a set of worksheets to help them explore their ideas. The latest iteration of these sheets are now ready for people to use and enjoy.

The PDF document presented below contains a total of 6 letter-sized worksheets which you can print on a home printer. Each of these pages addresses a different area of design and should be a useful aid in starting a conversation. Each of the sheets has a list of questions for the designer to answer.

I would love to get feedback from folks, both experienced designers and new ones. Please feel free to contact me at genesisoflegend at gmail

After the War is science-fiction horror roleplaying game, set on the frontier world of Polvo in the aftermath of a galactic conflict. This is a game about people who lost their homes and their families in the war and have come together to rebuild their lives on this rough, frontier world. It’s about diverse communities of Terrans, Martians, Belters, and Aliens, who come together to build a new home for themselves. When the seductive Song or brutal Tormenta threaten your settlements, it’s your job to protect your new world.
Your story is centered on the settlement that you now call home. You work to build, strengthen, and grow their fledgling home. You deal with internal disagreements and external threats, because this is the only place you have left.

Coming to Kickstarter in Fall of 2018

We are looking for playtesters for After the War, and we hope you are interested. If you would like to try out the game and give us valuable feedback, please click on the image below and fill in the quick google form to provide us with key information. Once that’s done, you can download the quickstart for free and get access to our private playtest community. 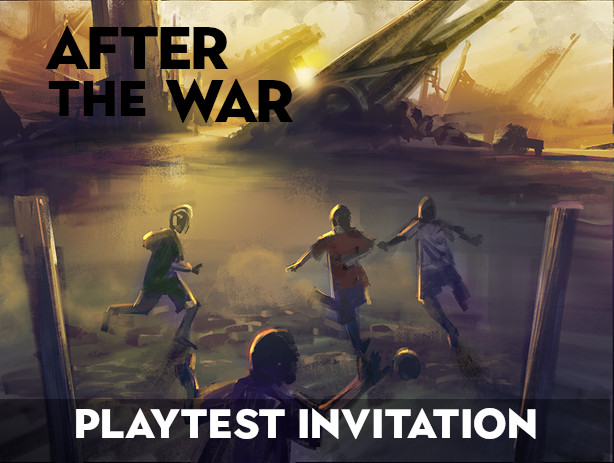 Thank you for your time, and welcome to Polvo!

Just want the quickstart without signing up for the playtest?  Check it out at http://eepurl.com/dBcJA5