Sorry about the delays in getting the latest version of Spark out the door, but that should be ready in about a week or so. Until then, I bring you a free little mini game called the Intrigue Engine.  It’s a little thought experiment inspired by Rob Donoghue’s Mighty Brain.

Feel free to take a look, to comment and to pilfer any clever bits.  It’s mostly Amber and Durance smashed together with a light sprinkling of Polaris in there.

P.s. The GenCon seminars, including the “Intro to Indie RPG’s” one, will be up very soon.

This is a section of the Spark RPG that I will regretfully have to cut during the revision process while I prepare version 3.5 of the beta. If anyone is looking for a write up on logistics for new gamers, please feel free to grab this wholesale.

You need to schedule some time when your group would be available. Discuss what day of the week you will be playing on and how frequently you plan on meeting. Try to determine when you plan on starting and finishing each session as well; I prefer 3-4 hour long sessions.

Every group has its own expectations on attendance at games. Some people can reliably block off game night, while others may have personal responsibilities or erratic work schedules.  The system can accommodate players who only participate infrequently but it’s up to you to figure out what’s comfortable for your group.

You need fixed and dependable space to play the game. It could be the home of one of the players, the GM’s apartment, a gaming club, or even an online environment. Discuss what the best play space might be for the group. If you are playing in someone else’s space, be polite and help clean up after the game.

I find it helpful to talk about food and drink before I start playing a game. Try to discuss any meal arrangements, snack foods, allergies, or beverage preferences. Games are much more enjoyable on a full stomach!

Microscope, by Lame Mage Productions, is an amazing game.  It gives you all of the tools to create your own epic history, outlining the epochs and describing the events within. If there is one complaint, it is that the game only accommodates a max of 4 people per game session.  When I was running it at Games on Demand at GenCon 2012, I wanted to share the experience with more people than the game allowed, so I started to hack.

I dragged in a total of 7 other players to play a massive game of Microscope.  The eight of us came together with the broad concept and the palate of the game world. Once we had that determined, we created a total of three bookends.  We created the Start Period, the Climax Period and the End Period. 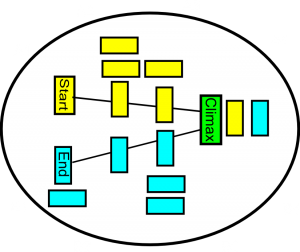 At that point, we split into two even sizes groups. Group A explored the span of time between the Start and the Climax, while group B explored what happened between the Climax and the End.  Both sides shared the Climax period and all of the Legacies.  Most importantly, we had sporadic communication between the two groups.  I asked the other group if they had established a particular important location, for example.  We also notified each other about facts that we had established about the world.

For scale, we ran an eight-person game of Microscope in 2 hours. I limited each group to two new Periods between their respective book-ends, and we were able to flesh things out beautifully. The only thing that would have made it better was a full 4 hour time slot, so we could explore the setting in more depth.

Hope you find this helpful! I will have some updated information on Spark shortly.

Thanks to all of your kind feedback, I have revised the Spark RPG open beta text. You can find the expanded text, with slightly improved formatting, under the link below!

I would love to hear what you think about this iteration of the game. I welcome all feedback especially more constructive criticism so I can further revise the game. The layout is still rudimentary, but I think that the text is a bit more functional.

I will be happy to run this version of the text for you at Games on Demand at GenCon. I hope to see you there!

Thank you for your time!

I have gotten some incredible feedback on the first version of the Beta, enough that I am now revising the game text to prepare the next version of the beta.  I wanted to let you know what the major findings are and explain my next steps.

I am attempting to revise the text and release the next version of the game as quickly as I can, for another cycle of open beta playtesting. I will be running a number of game sessions at GenCon during Games on Demand with the most recent iteration of the rules, and I would love to invite you to participate.

Thank you for reading