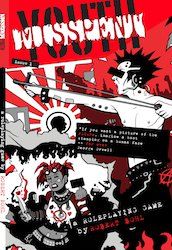 I’m in the midst of layout for my game, and I was pleased to see the release of Always/Never/Now by Will Hindmarch. It’s part of a trend of excellent professional game designs that can be played by a gamer on a budget, or examined in detail by any budding designers out there. This blog post is meant to be a repository of sorts, with links to where you can find these gems. If you know of other professional games that should go on this list, add them in the comments!

by John Harper of OneSeven Design. This is a Steampunk Fantasy, of magic wielding nobles, rogue airship captains and warp-blooded goblins. It’s one of the most elegant game designs I have seen, with remarkable amounts of rich setting detail crammed into a mere 16 pages. It won the 2010 ENnie Awards for best Free RPG, and deserved all the praise. You can find it over at http://www.onesevendesign.com/ladyblackbird/

by Kirin Robinson. Take a classical Red Box version of D&D. Add in some of the best innovations from 4th Edition, story game principles, OSR expertise and excellent graphic design. It won the 2011 ENnie Awards for best Free RPG for a reason. http://www.oldschoolhack.net/

by Ryan Macklin. It’s a roleplaying adventure game about stabbing gods in the face and falling to divine corruption. This is a crunchy, epic game with the best of modern design principles.  If you want to examine a game that creates a certain mood through the use of components/mechanics, take a look at Mythender.

by Matthijs Holter. This is one of the games inspired by the Nordic Larp tradition, and has some different divisions of GM responsibilities. If you like The Wizard of Earthsea or Fiasco, definitely take a look at this! http://norwegianstyle.wordpress.com/2009/07/04/archipelago-ii/

by Will Hindmarch. Cyberpunk stories, based on the framework of Lady Blackbird and including some novel adventure-design mechanics worth your attention. Chock full of goodness and worth your while.     http://rpg.drivethrustuff.com/product/114457/Always-Never-Now

by the folks at Evil Hat, will soon be available over at http://www.faterpg.com/

I know there are more out there, so please post the info in the comments and reshare this blogpost!